Welcome to episode 13 of Messin’ with Mark, God’s sitcom!

For those of you who are unfamiliar with this series, let me tell you how it started . . .

When I was very young, Jesus was walking around in His heavenly area up there when he saw his Dad looking down through the clouds, laughing His head off. Curious, he walked over and asked, “What’s up, Pop?”

“Again?” Jesus asked, “Why are You always picking on him?”

“I don’t know. There’s just something about him,” God said. “I mean, look at his face right now.”

Jesus looked down and started to chuckle, then stopped Himself. “Okay, I admit it’s kind of funny, but this is wrong. I mean, You created him. With all due respect, what kind of an example are you setting for the angels? We’re supposed to love and protect humanity, not single one out from all the rest for humiliation.”

God thought for a moment, then looked at Jesus and said, “You’re right. I should stop.” They looked at each other seriously, then said, “Naaaaaaaahhh” and laughed some more.

Jesus suggested that he make a regular show of his pranks on me. They named it Messin’ with Mark.

Remember Rodney Dangerfield’s bit about getting “no respect” from humans? It’s kind of like that, but on a cosmic level.

So, to today’s episode – The Day I Met Jesus

Okay, it wasn’t really Jesus, it was Ted Neeley, an actor who played Jesus in the 1973 movie, Jesus Christ, Superstar, and yet another day when God decided to mess with me a bit for his sitcom, created for heaven’s amusement, and put a look-alike of his son in my path just to watch me squirm. 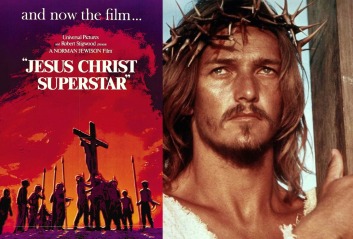 I didn’t see Jesus Christ Superstar until I was eighteen and it had a very profound effect on me. Until then, most actors played Jesus pretty straight but this guy was ultra-cool. He looked like a surfer. And he sang! Not only that, he sounded a lot like Steve Perry of Journey, my favorite band at the time.

I was walking around downtown Westwood one Saturday night (the “place to be” in L.A. back then) and ducked into one of the shops. I was looking down when I almost ran into someone coming out. The first thing I saw was a pair of leather sandals with the hem of a princely, earth-tone robe hanging above them. I looked up and was stunned to see Ted Neeley smiling benignly at me, dressed in the same get-up he wore in Jesus Christ Superstar. The only thing missing was the thorny crown.

It was probably the biggest “deer in the headlights” moment of my life. I had only seen the movie a few days earlier so it was a heck of a coincidence, and as far as I was concerned, this guy was Him. The One. The Great I Am. It didn’t help that he had one of those looks that sees right through you. “Pierces the soul” as they say. I started thinking about every cuss word I had said recently, that unpaid parking ticket, the pack of chewing gum I stole from Thrifty Mart when I was seven, etc.

I said, “Duhbudda bibidee” or something like that. Apparently aware that I was star-struck, dumbstruck, and just plain struck, he said “hello” in a very soft, Christ-like manner. I was a little disappointed he didn’t say, “Hello, my child” but you can’t have everything, I suppose.

Anyway, this was many years after the movie came out so he was obviously still “workin’ it” by dressing up as Jesus and walking around Westwood on Saturday nights, bringing his own brand of redemption to lonely women who felt guilty about one thing or another.

But maybe I’m being too cynical. Let’s give him the benefit of the doubt and say he was doing a stage performance in town that night. After all, he’s still doing it, Him bless him, all these years later. That man has saved a lot of souls.

I finally found my voice and said, “Ted Frickin’ Neeley! Dude! (I was also a surfer back then.) I just saw Jesus Christ Superstar! You were awesome!” He thanked me graciously, said “have a blessed night” and walked placidly away into the balmy California twilight, bestowing blessings on all he passed.

It was a little like meeting a corner Santa Claus. We all know it’s not really good ol’ St. Nick, but we suspend our disbelief so we can feel a bit of the magic we’d feel if it actually were.

I’ve always believed in hedging my bets, so as Ted passed me in that doorway, I made sure to touch the hem of his garment. You know . . . just in case.