When I was in high school, I had a very serious intention to work just enough to save money for a boat, load it with various vegetable seed packets, a few fishing poles, and enough supplies to last a lifetime, find a tropical island and abandon mankind altogether. The idea persisted for years, especially when I was working at jobs I didn’t care for or sitting in traffic breathing carcinogenic fumes. So I wrote this poem to put the idea to rest once and for all. The peace of solitude is delightful only temporarily. The spirit withers and dies without at least one other soul to share our lives with.

I was on my way to work a while back,
just trying to earn a few lousy bucks.
I was running late again, as usual.
Why? Because L.A. traffic sucks!

To make matters worse, I was dog tired
and “dog tired” is the perfect description
because my neighbor’s mutt barked so much,
I couldn’t fall sleep without a prescription.

On weekends, when I might have caught up on sleep,
I was kept awake by all the neighborhood brats
screaming their heads off and bouncing balls.
The little suckers were always driving me bats!

I would tell you all about my wonderful job
but it was so bad, you just might start crying.
It was the most mind-numbing job imaginable.
If I described it, you’d think I was lying!

Coming home, stuck in traffic, as usual,
my mind would drift to my “happy place”,
an imaginary island where I would go
to escape from the city’s rat race.

There, palm trees swayed in gentle tradewinds.
There was white sand and a turquoise-green sea.
But the greatest thing about my fantasy island
was that there was nobody else there but me!

I would daydream about exploring the tidepools.
My job could be inventing new kinds of fun
like surfing, diving, playing with dolphins,
and laying around under the tropical sun.

I was so lost in my fantasy, I didn’t see
the streetlight changing from yellow to red.
The next thing I knew, I was spinning around
and when I woke up, I thought I was dead.

A nurse was looking down at me, smiling.
She said, “Hello, there! How do you feel?”
The next greeting I got was from Mr. Pain.
Let me tell you, the agony was unreal.

It took me over six months to walk again.
By then, I was more convinced than ever
that the city would be the death of me yet
so I made a plan I thought was real clever.

I would quit my job, clear out my savings,
sell my house and everything else that I own,
then buy a small boat and some fishing poles,
find that island and live my life all alone.

I’d had it with struggling and busting my hump
at a lousy job that held no meaning for me.
Who says I have to contribute to progress?
The stupid hive wouldn’t miss one less bee.

There are hundreds of islands out in the Pacific
and a few that haven’t been found by Marriott yet.
The next thing I knew, I was at the helm of my boat
with only a map but no job, no boss, and no debt!

I sailed for months and searched high and low.
I saw many islands that looked perfectly fine
but on almost every one, I saw human beings,
and I’d had enough of them for one lifetime.

I was starting to become very annoyed and frustrated
when off in the distance, through my brass telescope,
I saw a fertile, green island that looked deserted!
I shouted with joy and my heart swelled with hope. 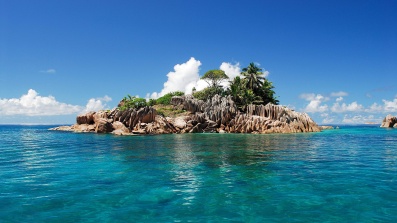 I anchored my boat and paddled the raft to shore,
then explored the whole island from side to side.
It was a true paradise full of peace and tranquility.
It was so beautiful, I just broke down and cried.

The next few months were harder than I had expected.
I had to build a hut that could withstand all the seasons.
But on nights when the wind would rattle the walls,
I wondered why I left and had to search for the reasons.

Finding food was hard, too. The fish didn’t always bite.
I was so unskilled with a spear, I felt like a putz.
I got so hungry one time, I almost went crazy.
I mean, one can only eat so many damn coconuts!

Still, anything was better than sitting in traffic
doing two miles an hour in a square, metal tomb,
wasting my life at a job I truly detested
and seeing nothing but my own little room.

I felt like a modern-day Robinson Crusoe
living a simple life by my own blue lagoon.
I thought about my neurotic boss back in L.A.
working himself to death; that pathetic buffoon.

At long last, I found the peace and quiet I’d sought
while lying in the sand, surfing, tanning and such.
I enjoyed it for a while, but I gradually realized
that you can even have peace and quiet too much! 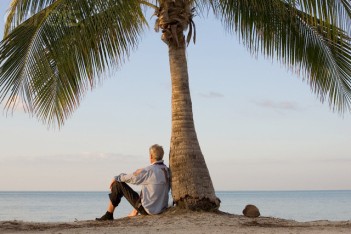 The more time passed, the more I fought to remember
all the reasons I had run from the world of man.
I’d spent a year of my life struggling to survive
with nothing to show for it but a hut and a tan.

This caused me great sadness and confusion
because for years, I had dreamed of this place.
Who would have thought that after only a year,
I would be longing to see another human face? 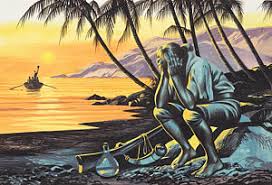 I missed conversations, and even the arguments,
though they had once caused me so much dismay.
I even missed the sounds of the bustling city,
the great din and clamor, and children at play.

I missed reading the newspaper in the morning,
though the pain there drove me out of my mind.
But how could I stop caring about my human family
or pretend that I’m not a part of mankind?

What was more noble? More virtuous and wise?
To hide there and ignore humanity’s plight?
Or to add my voice to the battle against evil?
To get dirty and bloodied in the good fight?

I spent a few months trying to convince myself
that I was just going through a homesick phase
but I started finding it harder to sleep at night
and a terrible loneliness enveloped my days. 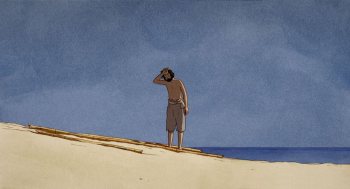 Finally, the peace on the island grew much too dark
so I pulled up my anchor and headed for home.
I had learned the first truth God Himself did of man –
That it’s not good for anyone to live all alone.

After six weeks at sea, the harbor approached.
The town was throbbing with life, garish and loud.
I docked my boat, and with a heart full of joy,
blended back into the crazy, wonderful crowd.