I once visited Pere Lachaise Cemetery in Paris, France.

It’s a strange place, full of odd, gothic sculptures, many of which didn’t make me feel any better about death. For instance, I could have done without the skulls with bat wings and couldn’t figure out why anyone would want them on a relative’s grave. Unless Herman Munster was buried there. It might work then. 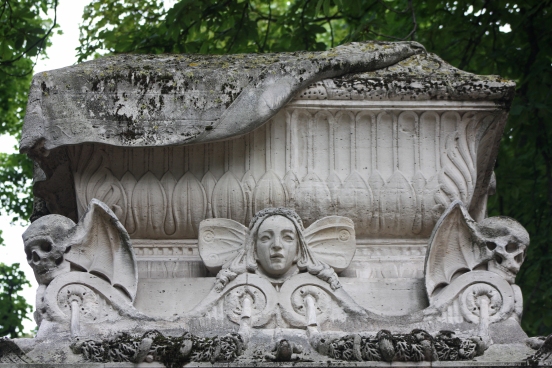 When I was younger and hadn’t lost anybody close to me yet, death was a fascinating abstraction to me. I was as obsessed with it as your average Egyptian pharaoh. I read all the Time-Life “Mysteries of the Unexplained” books. I attempted out-of-body experiences, astral travel and lucid dreaming. I even climbed over a cemetery wall on a Friday the 13th during a full, blue moon and sat in a freshly-dug grave with a Ouija board and candles. ALONE. Nothing happened, aside from the heebie-jeebie’s of my own imagination.

I stood in that grave and cursed the devil, daring him to appear to me. I was that crazy. For some reason, I desperately needed to know if there was something beyond this life. I had what little faith had been gathered from my mother saying The Lord’s Prayer to me at night as a child. (They didn’t go to church regularly.) But I needed proof.

Looking back, I think my obsession with death mirrored my love of youth. I was acutely aware even then of how transitory youth is, and how many doors opened because of it – professionally, romantically, and otherwise. But as time passed and death actually came to meet me, most notably in the sudden death of my brother and only sibling, I stopped investigating and making a pageantry of it and instead became more obsessed with living completely, with celebrating life, knowing I would grow old and die someday, too. I still feel that way. As Joseph Campbell once said, people aren’t as interested in the meaning of life as much as they are in living passionately and purposefully, and experiencing their lives completely. The human heart can endure anything except endless monotony; years and years of dull, identical days. The worst enemy of sadness isn’t happiness. It’s fun. Good, old-fashioned, seat-of-your-pants, exhilarating fun. Newness. Exploration.

So, because I honor life now instead of death, I don’t remember those flying skulls at Pere Lachaise as much as I remember graves like this one. 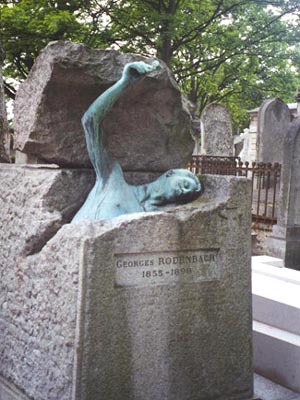 What a message. A lifeless body breaking out of a stone tomb to hold up a rose. Now that is honoring the spirit of a loved one.

Shortly after my brother died, I wrote a poem called How We Survive. Of everything I’ve ever written, it has traveled the furthest. I’ve received dozens of very touching emails from gracious people taking the time to let me know it helped them through the worst part of their grief. If you’ve lost someone you love, I hope it does the same for you. Grief is a terrible burden to bear. I lost my father last December, so I’m walking that road again, and doing my best to live up to my own poem.

If we are fortunate,
we are given a warning.

If not,
there is only the sudden horror,
the wrench of being torn apart;
of being reminded
that nothing is permanent,
not even the ones we love,
the ones our lives revolve around.

Life is a fragile affair.
We are all dancing
on the edge of a precipice,
a dizzying cliff so high
we can’t see the bottom.

One by one,
we lose those we love most
into the dark ravine.

So we must cherish them
without reservation.
Now.
Today.
This minute.
We will lose them
or they will lose us
someday.
This is certain.
There is no time for bickering.
And their loss
will leave a great pit in our hearts;
a pit we struggle to avoid
during the day
and fall into at night.

Some,
unable to accept this loss,
unable to determine
the value of life without them,
jump into that black pit
spiritually or physically,
hoping to find them there.

And some survive
the shock,
the denial,
the horror,
the bargaining,
the barren, empty aching,
the unanswered prayers,
the sleepless nights
when their breath is crushed
under the weight of silence
and all that it means.

Somehow, some survive all that and,
like a flower opening after a storm,
they slowly begin to remember
the one they lost
in a different way . . .

The laughter,
the irrepressible spirit,
the generous heart,
the way their smile made them feel,
the encouragement they gave
even as their own dreams were dying.

And in time, they fill the pit
with other memories,
the only memories that really matter.

We will still cry.
We will always cry.
But with loving reflection
more than hopeless longing.