And let’s face it, we all know at least one, right? That’s how bad things have become. I wish the graph below showed the rising popularity of something positive, but no, it shows the rising death toll due to the fact that some people just can’t seem to enjoy life without altering their brain chemistry. 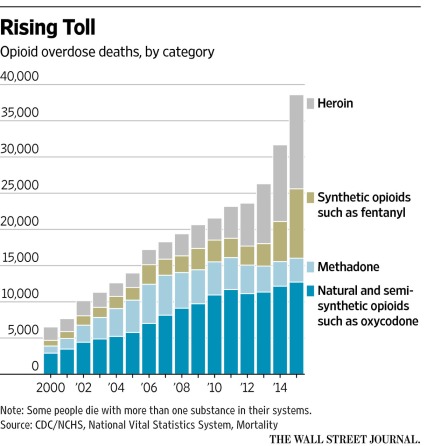 I keep hoping young people will learn from previous generations but it seems they always have to make the same mistakes all over again, and sometimes on an even larger scale.

I had one sibling, a brother. He died of a heroin overdose at the age of 37. He had been an addict for twenty years so I suppose he was lucky to live that long. Over the years, he went from the blonde, freckle-faced boy I played Frisbee with to a haggard, toothless convict (8 years in prison for drug-related offenses) covered with menacing tattoos. Only my parents and I could remember the boy he was. Everyone else saw only a dangerous loser.

I tried everything to get him to quit but it was hopeless. The only thing that ever got him clean for any significant length of time was another stretch in the joint. He had no wife, no family. We were the only ones left who loved him. We were the only ones who mourned him. All the friends he “partied” with disappeared the day he died like rats from a burning house.

My brother always said, “I’m only hurting me.” It’s one of the grandest self-deceptions ever. Illicit drug use is a global scourge and possibly the greatest source of evil in this world.

After his death, despite being acutely aware of how useless words are once people become addicted to drugs, I wanted to write something that might steer young people away from them, something that described the personal, familial, societal and global ramifications of “recreational” drug use.

Making tragedies mean something is the only way any kind of redemption is ever achieved, so I wrote this poem. I wrote it in rhyme because kids tend to like rhyming poems more. DARE used it for a while in their school programs. Hugs Not Drugs published it in their national magazine. I hope you’ll share it with any drug users you know, and I hope it does some good. As Emily Dickinson wrote –

Can someone please explain to me
why kids think drugs will set them free?
Instead of reveling in their youth,
seeking health and art and truth,
they waste it all for some false high
as their golden chances pass them by
for accomplishment, pride, and the joy of giving,
all the things that make life worth living;
a victim of their own selfish needs
while everyone who loves them bleeds.

Yet users say, “I’m only hurting me”,
oblivious to the pain in their family.
They constantly whine and complain
about how their lives are full of pain.
And they have my sympathy, but here’s the rub –
If their lives are hard, they should join the club.
Many of us have lives that are filled with pain
but we don’t deal with it by destroying our brain.
We work hard and study and pray and fight
to conquer the demons that plague us at night.
We get up early each day and work hard and long
to make our lives better, to be noble and strong.

What good does it do to bury pain in that way?
The problem’s still there when the drug wears away.
How long can confronting it be postponed?
How long can such laziness be condoned?
There is sorrow and pain in life. On that, I’d agree.
But beat it, don’t run from it, if you want to be free.
Using drugs just says that you’re helpless and weak
and shrouds even further the answers you seek.
Aside from the fact that it’s foolish and wrong,
it tells everyone that you’re not very strong.
Not strong enough to face life straight;
Not in control of your own fate.

Do you really think drugs are just harmless fun?
Then why does your dealer always carry a gun?
Have you ever really stopped to think it through . . .
The mayhem drugs cause on their way to you?
The habit drug users call “recreation”
causes death, despair, and devastation
in impoverished countries that they’ll never see
and right here at home in the land of the free.
But the land of the free has no room left in its jails
and the home of the brave is boarded and nailed
to keep out the rising legions of hell;
to hide in our sanctuaries and pretend all is well.

The experiment of America is becoming a sham
and drugs are the biggest chink in the dam.
All our institutions are beginning to fall
and if we lose our children, God help us all.
But day after day, the death toll repeats.
Dealers killing for control of the streets.
Gangs turning neighborhoods into war zones
where folks are afraid to come out of their homes.

And when their only concern should be getting grades higher,
children have to worry about getting caught in crossfire.
In their lives, the specter of death always looms.
They don’t even feel safe anymore in their rooms.
Their sleep is uneasy when nighttime falls,
worried the bullets will come through their walls.
And peace officers, every day, have to die
just so some ignorant fool can get high.
If the buyers stopped coming, all this carnage would end
so if you have to keep using, at least don’t pretend
that you hurt no one else. That’s an idiotic deduction.
No, you’re just one more stop on a trail of destruction.

My words may sound harsh but they’re written with love
because I can either hug you or give you a shove.
I’ll say anything to you and do whatever it takes
because if you gamble, you should know all the stakes.
I’m not a preacher or some self-righteous fool
but it seems to me drugs are the devil’s best tool.
Drugs turn young boys with eyes clear and bright,
into homeless men sleeping in alleys at night.
Drugs make young girls start turning tricks,
selling their bodies for one more fix.

Drugs enter your life as a fun-loving guest
then slowly but surely rob you of your best.
You hardly notice as they become your master,
turning you and your life into a disaster.

So if you want to be part of the coolest crowd,
look for the people who are strong and proud.
Take it from me if you won’t from another
because drugs took the life of my only brother. 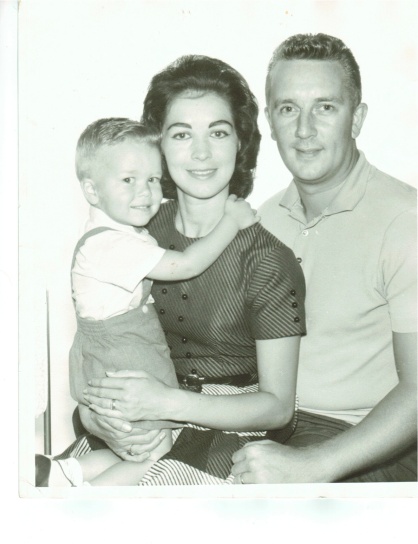 If your loved one is still not convinced, and especially if meth is their “drug of choice”, share this lovely story with them –